MANAGEMENT OF INVASIVE PLANTS IN THE WESTERN USA

Why we need plants

​Why we need plants: AKA Plants are Essential Workers!

Why do we need plants? To put it bluntly, so we can all continue to live on Planet Earth.

My dear friend Carolyn has coaxed me for several years to read Robin Wall Kimmerer’s book, Braiding Sweetgrass. She knew that Kimmerer’s relationship with plants would be meaningful to me and relevant to this project. Kimmerer is a botanist and ecologist and a member of the Citizen Potawatomi Nation. In the first few pages of the book, Kimmerer references the sacred nature of sweetgrass or wiingasshk. This species, Hierochloe odorata, is now an endangered species in the eastern USA. As soon as I started reading her book, I quickly made some important connections with her thoughts/beliefs regarding plants. As did Kimmerer’s up-bringing, my mother’s influence on me has installed a deep reverence for plants and the earth. Kimmerer refers to plants as “gifts from the earth” (p. 24). And she believes that, “Gifts from the earth…establish a particular relationship, an obligation of sorts to give, to receive, and to reciprocate” (p. 25).

Kimmerer also tells us, “For all of us, becoming indigenous to a place means living as if your children’s future mattered, to take care of the land as if our lives, both material and spiritual depended on it” (p. 9). This is a belief, a life lesson, that I identify with very deeply. She goes on to say, “In Native ways of knowing, human people are often referred to as the ‘younger brothers of Creation.’ We say that humans have the least experience with how to live and thus the most to learn – we must look to our teachers among the other species for guidance. Their wisdom is apparent in the way they live. They teach us by example. They’ve been on the earth far longer than we have been, and have had time to figure things out” (p.9).

It is this reverence for plants, even non-native plants, that inspired me to take up this project. I grew up with a respect for all plants, and for their important role on the planet. In recent decades, as the phrase “noxious weeds” became more and more common, I had some concerns about our rapidly shifting ideology about plants. When I see Kochia, for example, covering a recently disturbed area, my first thought is not, “Oh, that’s a weed. I need to pull it up.” My thought is, “Look at how quickly that plant has moved into the disturbed area, trying to protect the soil from being blown or washed away.”

The importance of plants is well summarized on the NRCS Plant Materials Program website: “Many of today's environmental challenges can be addressed through the use of plants. Plants hold soil in place, protect stream banks and shores, filter pollutants, offer food for livestock and cover for wildlife. Plants heal the land after wildfire and mining, floods, and drought.”

Refer to the section, Native Plants, for details on the importance of locally native plants to the ecosystems of the world, and as food and habitat for native insects, birds, bats, and bees. That chapter also provides information on the value of restoring damaged lands by growing native plants.

The year 2020 gives new meaning to the phrase "essential worker," as we have gained a new respect for those who keep us all alive, from healthcare workers, to grocery store employees, to postal workers, to truck drivers, to factory and meat-packing plant workers. I have the same respect for plants, even those plants that we also view as noxious weeds. As seen in the above photo, even Kochia is doing its job to preserve the soil.

Humans and other organisms are able to survive on Planet Earth because we consume oxygen. Oxygen is produced by plants, through the amazing chemical processes of photosynthesis. During photosynthesis, plants use sunlight to combine carbon dioxide from the air or water, with water (from the soil and oceans and lakes), to produce carbohydrates within the plants. Carbohydrates are the basis of the food supply for life on Earth, both on land and in the oceans.

The majority of the world’s oxygen, about 70%, is produced by phytoplankton (microalgae, which are non-vascular plants) in oceans and lakes. During photosynthesis, oxygen is excreted into the air, or in the oceans and lakes, as a by-product. Without plants, we have no oxygen.

We are warming our oceans at an alarming rate. Warming the oceans causes disruption of photosynthesis, which causes reduction in oxygen production by phytoplankton. This disruption could be the most dangerous consequence of global climate change (Sekerci, & Petrovskii, 2015).

The great forests of the world are major producers of oxygen, but they are also major consumers of that oxygen. So the net production of oxygen by trees and shrubs, and other vascular plants, is much lower than for phytoplankton.

More important than the oxygen production of vascular plants is the fact that they sequester carbon. By pulling carbon dioxide from the air, trees and shrubs and forbs and grasses fix carbon in the soil, thus building up the soil layers. And through evapotranspiration (movement of water from the soil into the air via the leaves), trees and other plants help stabilize rainfall cycles. Thus forests play a crucial role in climate regulation (Zimmer, 2019). In a study in Beijing, “The photosynthetic rates of 65 common tree species were measured. Regression models were constructed to calculate carbon dioxide sequestration and oxygen generation. It was concluded that the urban forests in Beijing could release oxygen at 23,000 t/day and sequester carbon dioxide at 33,000 t/day” (Jim & Chen, 2009).

The current rate of destruction of the major forests of the world, such as the Amazon rainforests, is alarming. The loss of this vast reservoir of carbon and oxygen will have dramatic effects, not only on the availability of carbon, oxygen, and soil, but on climate regulation. As plants pull water up out of the soil or oceans and lakes, use it in photosynthesis, and then expel the unused portion back into the atmosphere through their leaves, this forms a crucial part of the worldwide water cycle. And the water cycle is the crucial engine of the weather.

Before poor farming practices removed the top layers of soil, the North American prairies were among the richest soils in the world. The prairies encompassed most of the lands in North Dakota, South Dakota, Nebraska, Kansas, and Oklahoma. In addition, prairies covered significant portions of Montana, Wyoming, Colorado, New Mexico, Texas, Missouri, Iowa, Illinois, Indiana, Wisconsin, and Minnesota, and smaller but significant portions of Washington and California. Prairies also covered large areas of Canada.

Prairie soils became rich due to the massive amount of plant material that grew within it over centuries. In particular, native grasses develop rich soils due to their deep and extensive root systems. As the plants grow and die, they add layer upon layer of carbon and other nutrients into the soil, ultimately creating a thick, black layer of topsoil that provides many nutrients for the growth of other plants. These rich soils formed the basis of a thriving agriculture. Today, less than 1% of native prairies remain in existence.

For details on what happened when we wasted massive amounts of prairie topsoils, refer to the section The Dust Bowl. The Dust Bowl resulted from prolonged drought in the United States in the 1930s along with poor farming practices.

Not every acre of land on the Earth is arable – able to support crops. Each year, many more acres of land is lost from agriculture by the following human activities: the expansion of towns and cities, mining operations, lumbering operations, and poorly managed agriculture and livestock production. We have a limited supply of arable land, and thus we need to do all we can to conserve our soil and its essential carbon.

“The National Research Council defined ecological restoration thus: ‘The return of an ecosystem to a close approximation of its condition prior to disturbance. In restoration, ecological damage to the resource is repaired. Both the structure and the function of the ecosystem are recreated. Merely recreating form without the function, or the function in an artificial configuration bearing little resemblance to a natural resource does not constitute restoration. The goal is to emulate nature’” (Kimmerer, 2013, p. 330).

But the NRC definition does not tell the whole story. Kimmerer tells us that, “Plants are the first restoration ecologists. They are using their gifts for healing the land, showing us the way” (Kimmerer, 2013, p. 332).

And she goes on to point out that, “The slowly accreting community of weedy species can be a partner in restoration. They are developing ecosystem structure and function, beginning ever so slowly to create ecosystem services such as nutrient cycling, biodiversity, and soil formation” (Kimmerer, 2013, p. 334).

In her chapter, “The Sacred and the Superfund,” Dr. Kimmerer describes the destruction of the land surrounding, and the waters within Onondaga Lake, next to Syracuse, New York. For over 100 years, tons of industrial wastes, sewage, and other sources of runoff, poured into the lake. And she describes the gradual regeneration of the lake, by plants, the waters, and the earth.

Dr. Kimmerer tells us, “It's true that when you walk on the waste beds you can see the hand of destruction, but you can also see hope in the way a seed lands in a tiny crack and puts down a root and begins to build the soil again. The plants remind me of our neighbors at Onondaga Nation, Native people faced with daunting odds, great hostility, and an environment much changed from the rich land that first sustained them. But the plants and the people survive. Plant people and human people are still here and are still meeting their responsibilities” (Kimmerer, 2013, p. 337-338).
​
Food, clothing, and building materials

Plants provide almost all of our food (some foods are produced from bacterial processes). The fruits and vegetables the world consumes all were developed from plants that were once native to some area of the world. All the meat we consume is produced from animals that consume almost entirely plants. Biofuels are made from plants. And of course, much of our clothing is made from plants (cotton and linen). And we rely on the wood from forests for building materials and paper.

Roughly 35% of all medicines used in the USA are made from plants, or synthesized based on the chemical composition of plants. And we would not know which of the approximately 391,000 species of vascular plants have edible or medicinal properties, were it not for the knowledge we have learned from indigenous tribal elders from all over the world, elders whose ancestors carried out the trial-and-error processes for us, to determine which plants are safe to eat, which are poisonous, and which have medicinal qualities. A number of plants that we now consider weeds were brought to the USA because of their medicinal and/or edible properties. A few examples are chicory, wild lettuce, sow thistle, dandelions, dock, plantain, kudzu, lamb’s-quarters, pigweed. Several of these have been in the USA for centuries and have long been in use by various indigenous tribes. 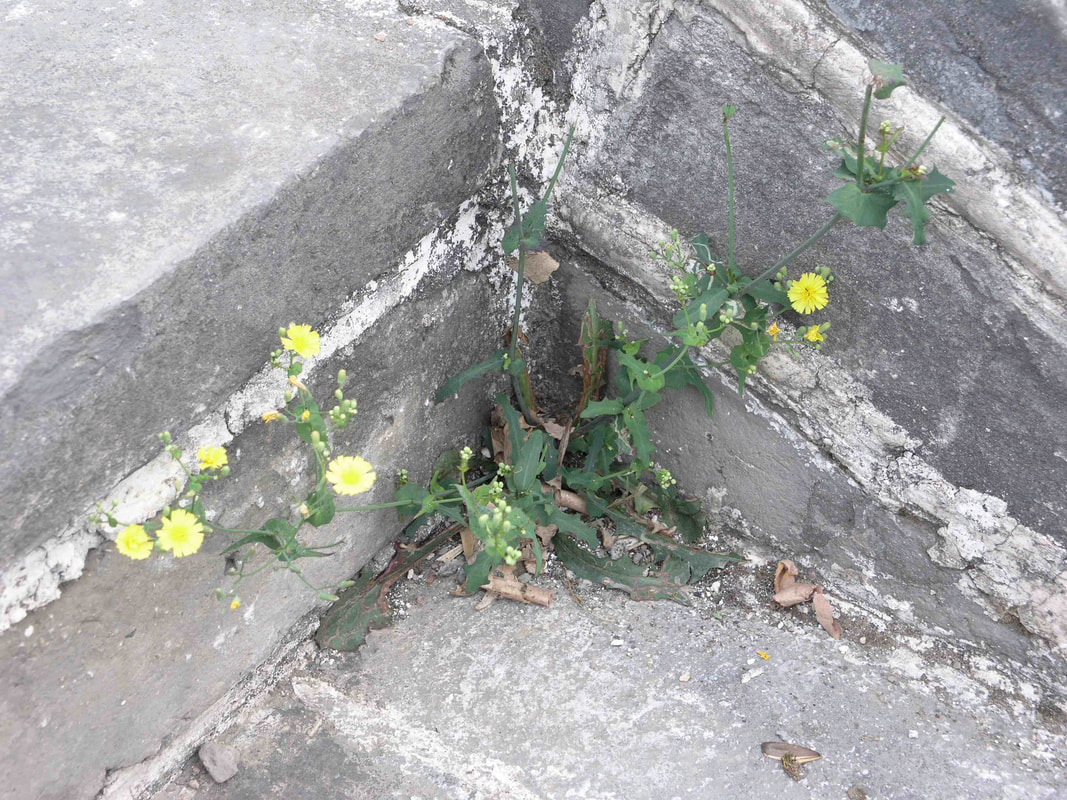